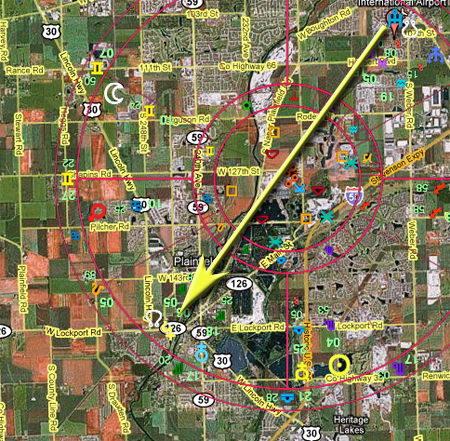 Regarding Stacy Peterson’s chart, I’m interested in how exactly you lay an astrology chart over a map? How did you come up with the six miles? Is there a site giving details of the experimental technique?

The site with the experimental technique went down,(see comment below) though I did link to the person who originally posted it. I did however print her examples and have a copy in a workbook I keep on forensic astrology.

Renee Francis who worked on this from an astrological perspective on missing children cases believed that:

“the date, time and location of a child’s disapperance will reveal the qualities present at the time of the abduction an offer a geographical direction of the movement for the kidnapper with the victim.”

This astrologer, speaking anecdotally, would like to point out that while this method works for all kinds of missing person cases, different types of cases seem to use different indicators in the chart. In people missing in action, like the two hikers in Alaska, there was no indicator of a perpetrator, so I was confident that the girls were alive, which happily turned out to be the case. In the situation where a crime was involved the perpetrator of the crime is very much part of the action within the chart.

How The Method Works

If you wanted to lay a chart over a map, you could print the chart on a transparency or some thing like vellum paper. Keeping in mind that the top of the chart is south, the bottom is north, right is west and left is east, you would turn it around until North was at the top and then place it on the map.

The next step is to determine what symbols represent what.

While Renee Francis liked Mars as the perpetrator of the crime, this astrologer finds that the perpertrator may be the Sun, Mars or in the case of Annie Le, Mercury. In the case of Sandru Cantu, we find the Sun, Moon, Venus and Mercury in a stellium chillingly in the eighth house. The moon involved indicated a woman was part of the crime. As we found out later the woman took the child to the woman’s father’s church.

What these planets seem to share in common is some energetic connection to the planet of transformation Pluto. The image conjured up is one of “the angel of death.”

Female victims are identified more often by the planet Venus, though the moon can not be ruled out. Sometimes the planet Mercury is the significator if they are a child or a teenager.

While the significator represents the person alive, Saturn in energetic connection to the significator seems to indicate the general compass orientation of the victim’s body. It is important to remember as mentioned above that a horoscope chart is backward, so to get the proper compass orientation you need to flip the map so that the fourth house is at the top of the page.

The zodiac sign of the significator and Saturn seem to point the kind of location the victim’s body can be found. Sometimes the zodiac sign on the cusp of the house in which Saturn is located provides a similar clue.

Debra Houlding provides an excellent list of locations by zodiac signs in her descriptions of the zodiac signs.

The Number of Miles the Victim Was Transported

While it it seems to be easy enough to get a general location in which to start looking, the critical information of how many miles away from the place the victim was last seen is more elusive. After the fact, it all seems so obvious, but in the middle of an investigation there are so many possibilities that its hard to zero in any one factor. 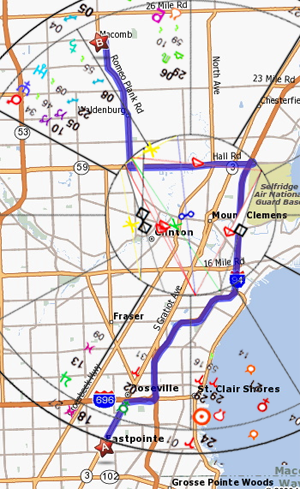 In the case of Sandra Cantu, the sign on the cusp of the 9th house, inches from the fatal Moon, Sun, Venus, and Mercury stellium in aspect to Pluto was two degrees of Taurus. She was found in a field two miles away from her home. In the case of Cindy Zarzycki, a thirteen year old who was abducted by a pedophile, her body was found 24.5 miles from her home. Saturn was inconjunct Venus, an the degrees on the beginning and ending of the house that held Venus 24 & 5. If you look directly across, you’ll see Pluto in the house with 24 on the cusp and Saturn in the house marked 5.

For Stacy Peterson, Venus, representing “a woman” is sitting next to Saturn “the body” and is subject to an opposition from Uranus (sudden accident) and challenges (square) the planet of transformation sitting next to the planet of abundance (Jupiter). It is in challenge aspect to the moon in Gemini. It seemed to me at 10:45 AM we were dealing with unfortunately a dead body.

You can count the degree of Saturn, the degree of the significator, and you can either add them, not add them and/or reduce the number. Stacy Peterson could be 6 miles away, by degree on Saturn, or 5 by the degree on the house of the eighth were Saturn is or 19 miles away from Venus or 24 by adding Venus and Saturn. I’m going with the six miles considering the rather short time frames Peterson would have had to take care of the body according the event time-line of the day’s events. With Saturn is at 6 degrees, I took the degrees for miles and drew a line straight from the Peterson’s home to a mile six miles away in the direction Saturn points to Plainfield lake.

There are a number of storage units in that area. Saturn is in Virgo and Virgo is associated with storage units. I think the body was originally placed in one such unit.

As I’ve said, it is an experimental technique and it does not always work. More work is needed to refine it.

What I appreciate about using the event chart for clues is that in most cases the symbols work! It is quite possibly the most literal use of astrology with replicable results. While it is easy to get excited about such a prospect, work and time will tell if this observation proves out.

7 Responses to The Astrology of Missing Persons: Experimental Map Technique