The Astrology of the University of Alabama Shootings: Under an Aquarian Moon 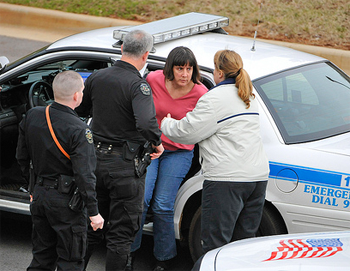 [/caption]>“research star” of the University of Alamaba faculty, was arrested and charged with one count of felony murder after allegedly opening fire on the tenure committee, killing three. Shortly after 4 p.m. is when Amy Bishop allegedly walked into the Shelby Center, went to the 3rd floor and started gunning down co-workers in a faculty meeting.

Why would an accomplished scientist with a husband, family and career do such a thing?

Dr. Bishop received her doctorate from Harvard University’s Department of Genetics and came to UAHuntsville in the fall of 2003 as an assistant professor of biology. UAHuntsville’s website listed her courses taught as:

She also conducted numerous research projects focused on molecular biology of oxidative stress, neurobiology, neuroengineering and induced adaptive resistance and has been cited in multiple publications.

Bishop [is the ] co-inventor of “InQ,” a new cell growth incubator which promised to cut the costs, size and maintenance involved in the mechanics of cell generation. This achievement was praised by the University of Alabama President.

This remarkable technology, which will change the way biological and medical research is conducted, was developed by Dr. Amy Bishop, an assistant professor in the Department of Biological Sciences at The University of Alabama in Huntsville. Then, the collective support of Biztech and the Huntsville Angel Network helped InQ get to market.

Multiple sources have stated that Dr. Bishop was notified Friday morning she would not be receiving tenure, and that this served as the catalyst in Friday’s tragedy. Dr. This decision was the result of Dr. Bishop’s appeal of the denial of her original request for tenure.

The event chart is set up for 4:10 PM since the news reports said Dr. Bishop walked in shortly after 4:00 PM and there could have been some back and forth about the appeal. Of course, we don’t have an accurate time, since the investigation is still proceeding.

However, it is no surprise that a Yod, called the Finger of God, in which events that happen that appear to be fated, is the foremost configuration of this tragedy. Mars Retrograde is at the base of one leg of the Yod, with Saturn, the planet of restrictions at the other. At the apex of the Yod is three planets, the Jupiter, Venus and Neptune that describe the two men and one woman that were killed.

Notice as well that there is a second Yod, from the apex of the Yod at one leg and Pluto, the planet of transformation on the other going back to Mars. This the configuration that I spoke about in the horoscope for this week, “You Can’t Always Get What You Want”.

Three more were injured, again two men and one woman, represented by the Sun, Moon and Mercury sitting very close to the apex of the Yod. The difference between the first set of three and the second is a sextile, indicating opportunity, from Pluto to the apex of the Yod, though the person represented by the Sun is very, very close to Neptune, which indicates the victim is in critical condition and his life hangs in the balance.

According to Wikipedia, the only birth date available for Dr. Bishop was “February 1965”. One speculates that Dr. Bishop’s sun sign is Aquarius. If this were true, while her actions are not, her sense of frustration and that the tenure process was “not fair” is understandable. The planet of action Mars is retrograde, that is, appears to be going backward in it’s path. Many Aquarians are feeling a sense of being held back and held in place, by the double action of Mars Retrograde and Saturn in Libra. Saturn is the zodiac sign of relationships, and so it makes perfect sense that other people, a tenure committee, decides her fate. As the moon swung in the sign of Aquarius as it opposed Mars, her sense of frustration as well as he sense of reality came to an unfortunate breaking point.

Had Dr. Bishop consulted an astrologer, she would have been told by just about anyone that this was not the right time to seek favors from people in authority and it would be best to wait for another time to do so.

Because we do not know Dr. Bishop’s chart yet, we do not know what caused her break with reality. We only know that it happened under an Aquarian moon, a time when we can expect the unexpected. 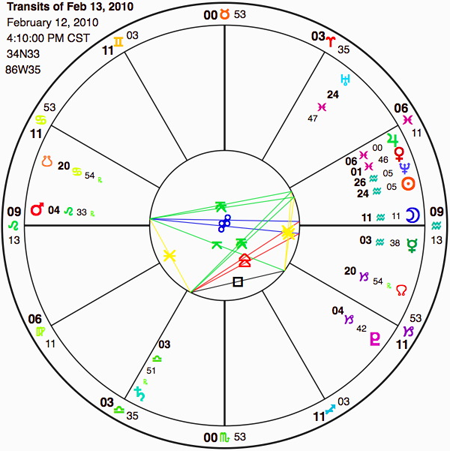 Photo printed under a Creative Commons License from Flickr

6 Responses to The Astrology of the University of Alabama Shootings: Under an Aquarian Moon