The Astrology of the Timeline of the Lisa Irwin Disappearance

(True Crime and Astrology)Three different timelines printed in separate sources provide a more complete detail of the events of the day Lisa Irwin went missing from her home. The timelines from “family sources” differ in details, while the third is a more objective one taken from multiple media reports.

Though the parents of Lisa Irwin remain silent, and the KS police department step down their involvement in this high profile case, new people step forward with their stories. The gaps in the timeline fill in and we can move astrologically through the last day Lisa Irwin was at home with her family.

These new clues emerged weeks after the reported abduction.

In a previous post this astrologer wrote of that in my opinion whatever happened to Lisa happened well before the reported abduction. This is based on the trigger event of the moon changing signs and conjoining the planet of transformation Pluto at around 4:30 AM. Let’s take a look of the day astrologically and see what may have happened on the day before Lisa Irwin was reported missing.

The Sun = Deborah Bradley Reason: The 4:30 AM chart is a “night” chart and in a night chart, the Sun cab represent a woman in authority. In addition Mercury, Saturn, and Venus sit along side Sun. These planets seems to represent the three children in Deborah Bradley’s care.

The Moon = Lisa Irwin. Reason: According to The Rulership Book by Rex E. Bills the moon can represent an infant.

The fourth house is often called the house of endings, so the moon conjoining Pluto, the planet of transformation (or some say death) is especially poignant. Note too that the Dark Moon Lilith is (glyph is reversed moon over cross of matter) in the eighth house of death and transformation. Lilith’s bad rap in the ancient world is that she killed young babies in their cribs. Lilith is directly opposite the Venus, which is the planet for a female in forensic astrology. Lilith is in Aries, which would make for rash, impulsive moves, or anger and/or aggression against the victim.

We see in this chart a stress aspect (the green line) from the Sun to Jupiter. This indicates that there is stress between the mother and the father or with the friendly aspect (sextile) from Jupiter to Neptune deception.

Also notice the Sun is in opposition to Uranus, the planet of accidents, and both these planets challenge, which astrologers call a square (black lines) aspect to the Moon/Pluto combination.

The precipitating event could have happened at this time.

In any case at around 5:30 AM the Sun moves from house two to house one, so Deborah gets up and puts Lisa to her crib.

7:19 AM–Jupiter, representing Jeremy has moved out the eighth house in in the seventh so by this time he is out of the house and at his first shift job. 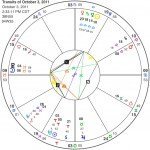 2:30– Jeremy Irwin arrives home from his regular job “later eating dinner and playing with the infant and her two brothers – ages 5 and 8.”

Jupiter is in the fourth house of the home indicating that the father is home. 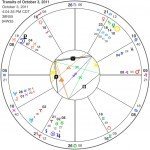 Neighbors are represented by the third house, the planet Mercury and the zodiac sign of Gemini. Here we see Jupiter sitting with the Part of Fortune in the third house in challenge aspect to Mars (the planet of troubles) on the doorway (cusp) of the seventh house of marriage. 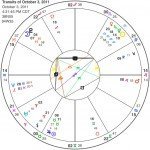 4:30 Next door neighbor Samantha Brando reportedly arrived at the Bradley/Irwin home about the time or shortly after Bradley leaves with her brother to go to the store. Irwin, Lisa’s father, is home alone with all three children. For some reason not specified, Brando checks on Lisa in her crib (italics mine) and sees that Lisa is apparently fine.

Jupiter is in the third house of children, so Jeremy is alone with the children. The Sun has migrated into the eighth house, which governs among other things, addictions. Deborah feels the need for some “adult time” and she and her brother head off to the store to facilitate it.

4:30 p.m. to 5 p.m. –Agreeing to a trial separation James Brando leaves home with some of his belongings. He reportedly spends the night on a friend’s couch

5:00 Deborah and her brother Phillip Netz return from the store and the consumption of alcohol starts. This is not specifically mentioned in anyone’s timeline of events, however in my opinion, there would be no need to for Brando (see 6:00) to go out an hour later and buy additional alcohol if they cracked that box open at 6:30 as family sources state.

The Sun actually crosses from the eighth to the seventh at 5:21 PM. Most likely this is when Deborah and Phillip arrive home.

Jeremy Irwin reportedly leaves for the side job at Starbucks.

Deborah comes in; Jeremy leaves. I doubt he ate dinner at that time. 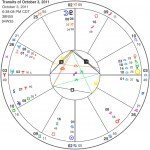 6:40 PM PM Deborah Bradley reports this as the last time she remembers seeing Lisa where she reportedly put Lisa to bed, though, in the absence of other reports it appears that no one has seen Lisa outside her crib all day long.

In a previous post, I stated that I thought Deborah and Jeremy had an argument at that time. This is because there is a lot of movement now in the chart. Uranus is on the cusp of the ascendant. The Moon/Pluto combo sits at the midheaven, the brightest part of the chart. The Sun with the stellium of children sit at the cusp of the seventh. As astrologers say, “Everything happens at the angles!” But if Jeremy is not home, and the cell phones shut off, there wouldn’t be an argument. But something is happening.

We do see the Part of Fortune moving into the third house of neighbors. This looks like Shane Beagley came to the house at this time.

Brando and Bradley continue to drink, smoke and chat on Bradley’s front porch with Shane Beagley.

Neighbor Shane Beagley now says he was at the Irwin-Bradley home in the hours before baby Lisa is said to have disappeared, according to media reports. As described by the Examiner, Beagley claims to have smoked and chatted with Bradley and her next-door-neighbor Samantha Brando on Bradley’s front stoop from about 7 p.m. to 7:30 p.m. He left the Bradley house about 8:30 p.m. or 9 p.m., he told CNN correspondent Jim Spellman. He also claims to have seen Brando at her own home at 10:30 and says he didn’t see Bradley at that time. Beagley said he didn’t see baby Lisa and no one went inside to check on the kids during the hours he was present.

At 8:45 The south node in Gemini (remember Gemini rules neighbors) moves from the second house to the first. Shane leaves the Irwin/Bradley home. 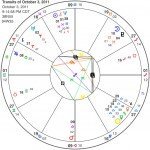 But what else do we see in this chart? Mars moves into the fourth house of the home. Deborah’s brother is up and about. But soon he leaves too as Mars crosses the fourth house cusp and into the third house at 9:24 PM.

10:30
-Neighbor goes home. Deborah Bradley turns out lights and goes to sleep with boys in her bed. –
-She believes she checked on Baby Lisa but is unsure, possibly because of the alcohol.
-Lights go out

Shane Beagley returns to see Brando at her house. Samantha stays outside talking with Shane for about an hour (GMA, KCTV 5) 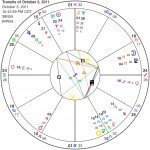 The 10:42 PM chart is an interesting chart. It shows Mars in the second house. The second house rules the death of nieces and nephews (The Rulership Book, Bills) and that Mars is in stress aspect (inconjunct, green line) the Moon/Pluto combo, previously identified as Lisa. In forensic astrology inconjuncts show a crime being committed.

10:33 p.m. – James Brando tells CNN he sent text to wife saying he loves her and their daughter (KCTV 5)

11:30 p.m. – Samantha goes inside after having been outside drinking with Shane; says everything looked normal, lights were out at Bradley/Irwin home, believes abduction had to have happened after that (KCTV 5)

Note:–No one sees or hears anything unusual at the Bradley/Irwin home. Bradley’s dog, a black lab, who would normally bark at anyone she does not know does not bark.

11:57 an outbound call is made from Deborah’s Bradley phone.