The Astrology of Disappearances: Comparing the cases of Stacey Peterson and Judith Bello

(True Crime & Astrology) Drew Peterson wants an apology. The former Bolingbrook, Illinois police sergeant being held on 20 million dollars bail in the murder of his third wife maintains that his 4th wife is still alive. He believes his wife ran away with another man suddenly leaving their children behind.

Drew Peterson believes that Illinois State Police should apologize for casting “a huge cloud of suspicion” on him by previously stating that his wife Stacy Peterson is “missing and presumed dead.”

Peterson’s request for an apology came via a press release issued Tuesday. The release points to an unrelated case where Judith Bello, a Washington woman, had been presumed dead as she had been missing for the past 18 years, but was recently discovered to be alive, living in California earlier this month. . .

Peterson has been jailed on $20 million bail since 2009 in connection with the 2004 murder of Kathleen Savio, his third wife who was found dead in a dry bathtub in 2004, and is a suspect in the disappearance of Stacy, his fourth wife. Stacy was last seen on October 28, 2007, and friends and loved ones have said she told them she had feared for her life.

Well let’s compare the cases and the charts of Judith Bello’s and Stacey Peterson and see what if anything they have in common.

The woman explained that she left because of serious problems with her husband. She didn’t reach out to her family because she was scared of the man and worried he would cause problems for her siblings

There is one similarity between the two cases. Both women were afraid for their lives. 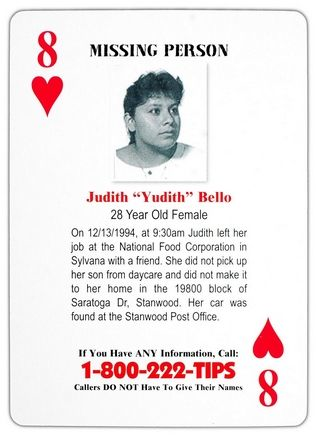 Judith Bello’s event chart is drawn with the information generally known about her disappearance. This is the chart in the inner wheel, since we have the date, time and place information. In the outside wheel is the birth chart for Judith Bello. We only have the date, (posted on a missing persons’ site) but we do not have the birthplace or the birth time. Since we are arranging her planets around the event chart, neither her birth time or her birthplace are critical for analysis. One must note however that we do not know her exact moon position. 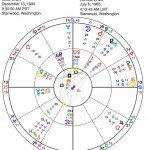 We see in this event chart Saturn, the planet of duties and responsibilities opposite the planet of trouble, Mars in the eighth house in challenge aspect to Pluto/Jupiter. All this seems to indicate a overbearing, possibly abusive individual that is driving the actions of the chart. See also that Saturn rules the ascendant (Saturn is the ruler of the sign of Capricorn, which sits at the ascendant). This is serious, for sure, and there are troubles with the man but note that there is a lack of her personal planets, Sun, Moon, Mercury, Venus or Mars connecting with this t-square involving the planet of death, Pluto.

If we were to say Judith was born in the evening we would say that Venus in Scorpio acted as a trigger planet to her moon activating a desire to preserve herself through secret actions.

Without a direct connection to Pluto it just would be really hard to say that Judith Bello had died about that time. As it turns out, she did not. 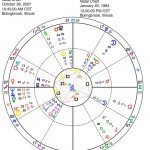 This charting is entirely different. The event chart shows a grand cross in mutable signs involving Pluto/Jupiter, Venus, the Moon and Uranus. Pluto/Jupiter shows the husband (Jupiter) as the arbiter of transformation (Pluto) challenging Venus and opposite the moon, both symbols of the female in the chart. Uranus is sudden and unexpected events, and also divorce which Stacey was reportedly contemplating.

Now look to see Stacey’s Venus conjunct Pluto in the event chart and her Mars/Pluto conjunction connecting with the event chart Sun. Looking at this chart you would conclude that Stacey, unfortunately has passed on.

Both women were afraid for their lives. Only one made it out of her marriage alive.