Meanwhile, the hunt for Stacy Peterson continues through her family’s efforts since local police maintains they do not have the “time or resources to check every lead quickly.”

Though Stacy’s Peterson’s family probably held out some hope that Stacy was alive, the announcement that Drew Peterson’s third wife’s death was a homicide
dealt a blow to that hope. What does an astrological analysis show of what happened to Stacy Peterson?

Missing Woman ‘Feared for Her Life’ Sisters Says
“She told me Friday night (October 26, 2007), ‘If anything happens to me, I fear for my life,'” said Cassandra Cales, who described her sister’s marriage as abusive and said Stacey was considering divorce.

The last time anyone outside the Peterson home talked to her was around 10:15 a.m., when she spoke briefly with a friend, Bruce Ziderich, about helping to paint an apartment he owned in nearby Yorkville.

Ziderich told her to wait until she heard from her sister, Cassandra Cales, before going to the apartment, according to Pamela Bosco, a longtime family friend.

Drew Peterson, 53, who resigned from the police department after being named a suspect in his wife’s disappearance, has told reporters that when he awoke around 11 a.m., his wife already had left.

Note: Drew Peterson gives conflicting accounts of the morning’s events. First he gets into bed with Stacy at 11:00 AM, then says at another time that he woke at 11:00 and Stacy was gone.

“Family sources say a neighbor reported seeing Drew and an unidentified man loading the barrel into the back of his now confiscated Yukon Denali.”

10/28 – 11:55 – Sharon calls the house, speaks with Kris. Sharon asks for Stacy, Kris stumbles at question and gives phone to Drew. Drew says that Stacy left for her grandfathers early this morning. Sharon asks if the kids can come over and have suckers and candy.
Family, Friends Recount the Day Stacy Disappeared
About noon, Sharon Bychowski, a neighbor and friend of Stacy’s, phoned Drew and told him she’d been to the market and had some candy for the kids.

10/28 – 22:00 – (Not Confirmed – Reported by media) Drew Peterson then dropped the relative off at his home, at which point the distraught man contacted a friend, saying words to the effect of,  I think I just helped Drew dispose of Stacy,  the source said.

‘Drew’s stepbrother Tom Morphey, who was arrested in the mid-1980s for alleged domestic violence, told a friend and reportedly told authorities that he helped Drew carry what he thinks might have been Stacy’s dead body from the house in a blue container.

Walter Martinek, Morphey’s friend, said Morphey told him that he was suspicious.

“He goes, ‘I don’t know what to do.’ He put his hands on my shoulder and said, ‘You can’t tell anyone,'” Martinek said. “He had told me that he thinks he may have helped Drew dispose of the body.”

10/28 – 23:00 – Cassandra goes to the house, and observes no cars in driveway gives Kris fund raising money and asks him if he’s alone? He says he’s home with Tom, Lacy and Anthony and tells Cassandra, Mom & Dad got into a fight, mom left and Dad’s out looking for her.

10/28 – 23:14 – Cassandra calls Drew looking for Stacy, Drew says Stacy called me at 9:00 pm telling him that she is leaving him, going on a little vacation and left the car somewhere in Bolingbrook, and I have to go find it. Cassandra asks what he is doing, Drew says that hes been out running around looking for Stacy. Cassandra asks where Drew is at, Drew claims he is at home. (During conversation Cassandra hears shuffling, a bunch of noises, and keys going into an ignition) {Drew’s statement is obviously a lie}

10/29 – 02:30 – (Three hours after Cassandra speaks to Drew, the second car, which was gone all day, shows up in the driveway.) Cassandra returns to house and sees both cars in the driveway. Bruce calls Drew, Drew says Stacy called him at 9pm and left the car at the whatchamacallit. Drew says let me get head straight, Stacy called at 9pm and left the car at Clow airport. (Inconsistent story)

(Clow Airport is just up the road from the Peterson’s home.)

At 11:26, Cales said she reached Peterson on his cell phone.

“He said, ‘Your sister left me,”‘ Cales recounted on the Web site, findstacypeterson.com. She recounted what he told her next: “She called me at 9 p.m. and said she was leaving me and going on a lil vacation … and she left the car somewhere in Bolingbrook.”

“He said, ‘She took $25,000 from the safe, her bikini is missing and her passport is missing, she’s disappeared just like your mom,”‘ said Bosco, the last comment referring to Cales’ and Stacy Peterson’s mother, who vanished when Stacy was a teenager.

Cales said she didn’t believe any of it – starting with Peterson’s contention that he was home. She knew that wasn’t true, she wrote, because she had just been there and was sitting around the corner.

In this long and convolted telling of the day’s events, it is apparent that Drew told conflicting stories and we are long way off from knowing the truth in the matter.

What kind of man is he? Without a birthtime, we do not have his moon position, a critical component in determining whether or not a man is violent. One reader sent by private email to this astrologer a declaration that Drew Peterson’s birth time is 8:15 PM. However, requests of this anonymous reader to send documentation of this birth time has gone unanswered, so again, thought the revised birth chart is very interesting we still have to say we do not have a definitive Moon position.

Going forward, his Sun is opposite the unpredictible sign of Uranus. This is a position which can bring on uncontrollable actions. He has his Mars in the possessive and controlling sign of Scorpio, which sits along side his Saturn. Here is a man who fears that he doesn’t measure up to being a man, fearful and suspicious of infidelities and frightened he will be left alone. With the planet of confusion and delusion sitting along side these two, it is quite possible that Peterson’s fears takes on a surreal life of their own, with his morbid fantasies appearing all to real to him.

What Does Astrology Say What Happened

On the day of Stacy’s disappearance, she was talking to a male friend, from her bed, supposedly with the sleeping Drew Peterson laying next to her. She was making plans to help him paint his apartment, but the friend suggested she wait until she heard from her sister until she came over. Perhaps this friend had a glimpse of how Peterson was with her and did not want to be in the middle of any trouble. However, once she got off the phone, the argument started. It would be inconcievable for a man with the controlling and manipulative qualities like Drew Peterson to be able to tolerate the thought that his wife was going to meet another man, even for something as innocent as helping him to paint his apartment. Afterall, he was slated to go back into work in six hours, and probably used the argument that he didn’t want to take care of the young children while she was galavanting around. At this point, Stacey probably announced that she was going to live him anyway and perhaps even (according to one news report) that she expected him out of the house by the middle to the week. Those words sealed her fate literally at the hands of Peterson.

In the event chart, the Moon, Uranus, Jupiter/Pluto and Venus from a grand cross. Uranus is in tension aspect to Venus, the Moon in tension aspect to Jupiter/Pluto. Did Stacy have an awareness of how much danger was she in? Her Mars/Pluto (violence & death) combination in her own chart was sitting directly on the event chart’s sun. Her Venus was sitting on the Pluto of the Event chart. This was not the time for ultimatums.

The Arabic Part for Death in the event chart is at 19 degrees of Aquarius, exactly conjuct Neptune in Aquarius. The Arabic part for a head injury is at 26 degrees Leo, in tension aspect to the Part of Death. Stacy Peterson was rendered unconscious by two sharp blows to the head, one from the striking force of Peterson’s hand, and the second from her head striking a sharp object, perhaps a piece of furniture. Two, because the event chart has the moon in Gemini, in which things tend to happen to pairs. By 11:49 Stacy was dead.

The rest of the day had Drew spent in spinning his web of obfuscation and lies, dragging in the involvement of his step brother to help load a mysterious blue barrel into Drew’s SUV It is unclear when that barrel is loaded into the truck. But around 9:00 PM Peterson picks up his step-brother takes him to a diner and gives him Drew Peterson’s cell phone. Then Drew Peterson supposedly called his cell phone, repeatedly from another location, apparently trying to make it look Stacy was calling him, telling him that she was leaving him. Within an hour of the pick-up, Drew took his shaken step-brother home.

It is likely that Cassandra had caught Peterson on the cell phone while he was completing his mission to dispose of that Stacy’s remains.

Where should police look?

There is an experimental techique that is used by at least one astrologer for locating victims. In using this technique, we would take an event chart and lay it over a map of the area. the event chart pin points the eight house as the significator for the event which on the compass points south west. With Venus representing Stacy and Saturn representing the body, her body could be found no closer than 6 miles Southwest of her home. In a straight line from the Peterson’s house, this would indicate the area of Plainfield Lake. Since the police have looked some many other places without results, it may be worth a look. 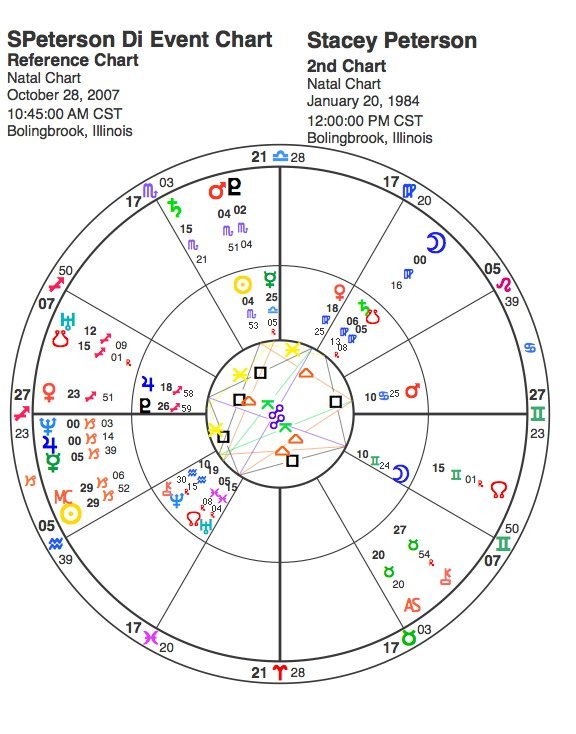 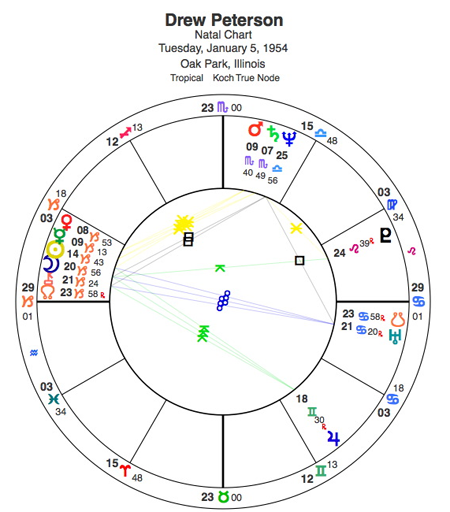 2 Responses to True Crime Astrology: The Disappearance of Stacy Peterson