(True Crime and Astrology) Law enforcement searched her home, fields, and ponds. They used dogs and arial searches, but it was the caretaker of a local cemetery that found the body of Karen Swift.

The body of Karen Swift was found just two miles from her Tennessee home, nearly six weeks after the 44-year-old mother was reported missing. Tennessee Bureau of Investigation Special Agent in Charge John Mehr told CNN that the body was discovered Saturday in Dyer County, near Bledsoe Cemetery.

Karen Swift had been to a Halloween party at the Dyersburg Country Club-The Farms on the Saturday evening, Oct. 29. She reportedly arrived home sometime after midnight after picking up one of her daughters from a sleepover because she did not feel well. Box stated David Swift allegedly spoke with Karen Swift briefly in the stairwell after she and the child were inside the house. Authorities allege David Swift told them he awoke the next morning (Sunday, Oct. 30) and could not find his wife and tried calling her cell phone with no answer. Soon afterward, a neighbor called David Swift to tell him Karen Swift’s SUV was on Millsfield Highway. He is then alleged to have called one of their sons in Arkansas to see if he could reach Karen Swift, but to no avail. David Swift is then reported to have called some of Karen Swift’s friends to see if they had seen her. At 2:37 p.m., a friend of Karen Swift’s called the Dyer County Sheriff’s Department and notified them she was missing and the dispatcher advised her that David Swift should call and give details. He is then reported to have called the sheriff’s department and given them details about what was going on.

Why Karen Swift would leave her home in the early morning hours of October 30 has not been answered. Why her clothes were found in bushes next to the abandoned SUV while her Halloween Costume was found in the car is a mystery. Why her husband (albeit estranged) would not become immediately concerned and go out to the SUV abandoned a half mile away is a quandry. But what is clear is that Karen Swift was murdered.

Missing since before Halloween, she was found 6 weeks later after intensive searches of the surrounding area. Astrologically, where she was found is an eye opener.

In the illustration below, the last seen chart is used in the center wheel. We have a date, a time and a location, so this chart is the one to use. The outside wheel is the birth chart of Karen Swift. While we do have her birth time, leaving us without a correct Moon sign, it is tempting to believe she was born in the early morning hours giving her a Cancer Moon conjunct her Jupiter. Even so she has Venus inconjunct (in stress aspect) to that Cancer Jupiter, so this is a woman who has a strong compunction to fulfill her maternal duties, even if her Aquarian Sun, Mercury and Venus would give her a strong desire for freedom in her life. This Jupiter/Venus aspect would be the reason why her friends say she would not leave her children. This strong Cancer element would also lead you to wonder why, once home after a late night drive to retrieve her child she would leave the house again. Those with a strong Cancer drive have a desire to return to and stay in the home.

The planet of trouble sits on the ascendant. Mars is the planet of action. Mars is opposite her Venus, so something has to happen. What happened we’ll leave to Law Enforcement. With her remains found they should figure out quickly enough who did it and why.

But where her body was found is a different study, one that applies to the experimental map technique I’ve blogged about.

In the flipped chart we see Karen Swift’s natal Saturn in left hand side of the chart, west of her home (signified by the A marker in the illustration). Saturn represents the body in forensic astrology. It is seen conjunct her natal Chiron and these two planets sit conjunct the planet of the unexpected, Uranus in the event chart. Most synchronously the event chart Mars is 23 degrees, her natal Saturn is 25 degrees of the sign it occupies. Chiron is 22 degrees and her natal Jupiter is 28 degrees. The description of where her body was found has been reported as “over two miles” and “two and half miles” from her home, while Google maps identifies the location as 2.8 miles away.

The astrology shows us quite clearly where her body was found. Hopefully Law Enforcement will wrap us this case with an arrest. 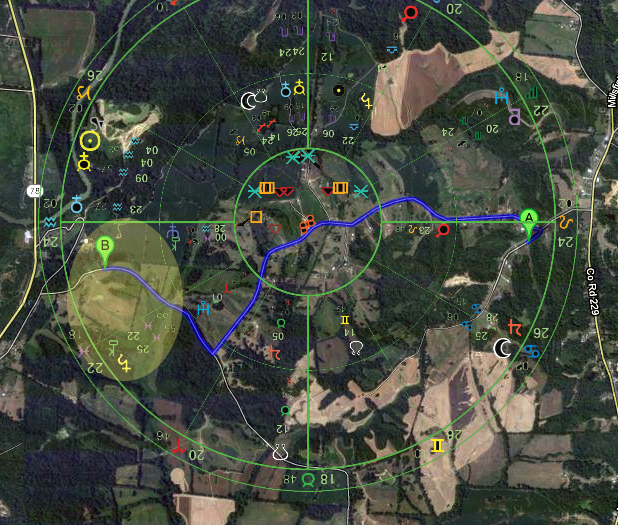