The Astrology of Disappearances: Lauren Spierer 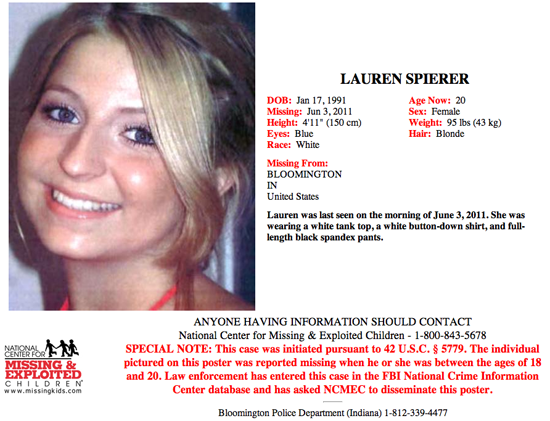 Blurred stories and a trickled release of information from the Bloomington Indiana Police Department gives a less than clear picture of what happened to Indiana University Lauren Spierer on June 3, 2011. The one thing we know is this, Lauren Spierer has vanished.

Reportedly Lauren was at a Sports Bar with a friend Corey Rossmann while her boyfriend was at his home watching a game waiting for Lauren to call him.

Lauren left the sports bar, Kilroy’s, with Rossman sometime about 2:15 and made the short walk to her apartment with him. Video documents that Lauren was at the building but before she went up to her apartment, Rossman was confronted by a group of young men, at least one of them being the friend of Lauren’s boyfriend. Rossman was clocked in the head, from which he claims memory loss of the events of that night. We do know that Spierer went with Rossman then towards his apartment. The last known sighting of Lauren was at around 3:00 AM by a video camera in what is a described as an alley heading toward Rossman’s apartment.

After that the story gets hazy. Despite the fact that Rossman was allegedly hit hard enough to lose his memory, and there was at least a twenty minute gap between the time of the incident and the time Lauren and Rossman were filmed in the alley, the cops or paramedics were not called. No, instead, this young man, under the influence and with a blow to his head decides to walk back to his apartment!

Lauren may or may not have lost her keys and purse in that alley. A conflicting report surfaced that the purse found belonged to an “unrelated crime victim.”

Lauren supposedly walked Rossman back to his apartment and then seeing him off to bed visited another of Rossman’s friends in that man’s apartment in the same building. This young man claims that he saw Lauren leave at 4:30 AM round the corner opposite of the way Lauren originally reached the building. Gentleman that he said he watched as she walked around the corner to make sure Lauren made it home safely. Apparently he wasn’t gentleman enough to actually walk her home. Surveillance cameras do not pick up Lauren walking home by the path suggested by Rossman’s friend.

Suffice it to say, police are now saying that they only know Lauren’s whereabouts up to 3:00 PM. The “last sighting” report of 4:30 has been dropped from official accounts. 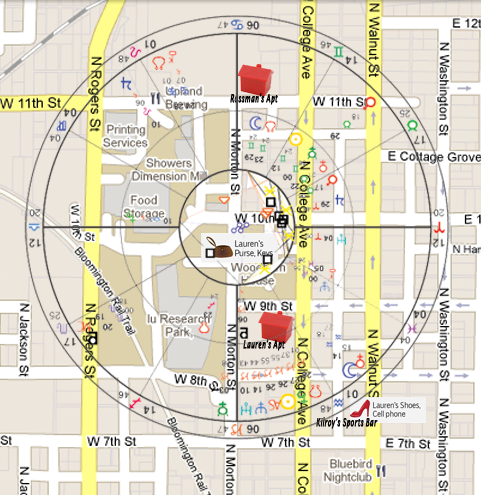 Interestingly enough a chart drawn for 2:30 AM, June 3, 2011 and flipped to place the map coordinates in their customary places shows the events of that time. In the illustration, the event chart is the inside wheel, Lauren’s chart is the outside wheel.

We flip the chart because ancient astrology practice places south at the top of the chart. Ancient astrologers drew charts with South at the top because ancient cartographers drew maps in this manner. It was the convention of the times. Astrology being an ancient science has carried forward this convention in modern astrology charts. Therefore when we want to see the direction of where things happen we have to turn the chart 180 degrees.

Doing this we see the crowd of people at Lauren’s apartment at 2:30. We see the Sun, Neptune, Uranus and Saturn, all masculine symbols.

Let’s backtrack a little bit and see what the astrology has to say about the events of the last day Lauren was seen.

We can track Lauren’s movements as the transiting Midheaven follows her like a puppy dog. The Midheaven is the place where things shine the brightest, so astrologically this symbol is like shining a spotlight on the chart.

Prior to 12:30 AM June 3rd Spierer was with Hadir Tamir, her roommate at their Smallwood apartment

12:30 a.m. Spierer went with another Smallwood resident to friend’s apartment up the street.

Spierer’s boyfriend is reported to be watching the same game from his apartment waiting for Spierer to call him.

They were joined there by Corey Rossman who lives two doors down. Rossman’s room mate was also there.

This friend’s place was a frequent hangout for Spierer. Tamir says “I’ve been good friends with (him) since our freshman year,” she said, and added “we always used to be at his apartment last year.” (ed comment: But not this year?)

? to 2:30 AM A while later, Rossman and Spierer went to a bar.
The friend who accompanied her to Rossman’s apartment returned to Smallwood Apartments.

At 1:33 AM transiting Midheaven conjuncts transiting Pluto sitting on Lauren’s Mercury, the planet of short trips. Here is when Lauren and Corey go the bar.

Spierer, according to her room mate, met Rossman only two weeks prior at the Indianapolis 500.

In the timeline printed 6/16 the police say Spierers and Rossman enter the bar at 1:46 PM.

Unconfirmed reports have Spierer’s boyfriend and Spierer talking or texting on the phone while she was at the bar.

About 2:30 to 2:40 a.m., Spierer and Rossman returned to her building, where other students confronted him.

The astrology has the Midheaven conjuncts Uranus/Neptune/Sun/Saturn combo in Lauren’s chart, all masculine symbols.

Rossman is allegedly on a “not allowed to visit list” at that apartment. Included in the people involved in the altercation is a person supposedly the best friend of her boyfriend.

One punched him in the face, causing him to lose memory of the exchange and his interactions with Spierer after that, Rossman’s lawyer said. Or speculatively Rossman was too intoxicated to remember anything, because if Rossman been struck with enough force to lose his memory, he would have sustained a head injury that would require medical attention. No paramedics were called by anyone.

It is important to note that Lauren and Rossman were inside the building, but five floors away from her apartment. Had Rossman needed medical attention, or was in no condition to travel, they were just a few steps away from her own apartment where conceivably there were resources to address the situation. Instead, they walk out of the building. Why?

Rossman’s roommate puts him to bed. Meaning Rossman was so out of it, he couldn’t make it to his own bed, but this obviously was a frequent enough occurrence that his roommate was not concerned enough about his roommate’s condition to call paramedics.

Approximately 3:00 PM to 4:15 PM Speirer went to the friend’s apartment in the same building where she started out.

Tamir, who has spoken with the friend who last saw Spierer said that he had tried to prevent her from leaving.

“He told me he tried to make her stay and sleep on his couch but she refused, so finally after trying to convince her, she left,” Tamir told The Journal News.

Before leaving, Tamir said, Spierer used the friend’s phone to call the person who first escorted her to Rossman’s apartment building to see if he knew where her phone was.

My feeling is that that friend’s concern is disingenuous. From the story he told Tamir we can infer that Spierer, in her intoxicated state in spite of knowing him for a long time did not feel comfortable enough to stay for a few more hours in his apartment, and he was not concerned enough to walk her home. Does this sound right to you?

4:14 AM MC conjuncts Lauren’s Moon/Venus combination which squares her Pluto and transiting Mars. This is when whatever happens to Lauren happens.

As I’ve said before, the planet Venus often represents the victim in a forensic chart study. That the planet of transformation, Pluto, challenges her Venus position, is not a good sign. That Mars, as it moved in the sky, (transits Mars), opposes that Pluto triggers the events displayed by the Pluto/Venus aspect.

For those not that familiar with astrology, Venus/Pluto aspects signify a person with an obsessive love nature or someone who attracts people obsessive about them. In events tied with a trigger like Mars, it can, (though not always) signify extremely possessive activities like stalking, unwelcome and forceful sexual advances up to and including rape.

One thing that sticks out in the event charts of that evening is that following the Venus/Mars combination is Mercury representing a young man or two young men that follows Venus/Mars. This looks like some sort of stalking activity, that someone is watching Spierer and noting her movements.

Another scenario includes drugs. Law Enforcement acknowledge hearing of rumors that Lauren died of a cocaine overdose and that her companions frantically worked to conceal her body.

This scenario is possible as well. In a chart drawn up for the arrival at Rossman’s apartment you see the transiting Moon opposing Pluto and challenging the planet of sudden events and accidents, Uranus. The moon also is in friendly energetic connection to the planet of drugs, Neptune. Neptune sits along side with the planet of bodily wounds, Chiron. Drugs, plus drinking, plus a heart condition is not a good combination.

And maybe all these scenarios roll up into one, with whoever is watching Spierer confronting her at Rossman’s friend’s apartment causing enough excitement, after a night of intoxication and possibly cocaine to trigger an episode of her heart condition.

Maybe this is why Spierer’s boyfriend has left town in the middle of the investigation of his girlfriend’s disappearance.

However, if friend who last saw Spierer is saying that Lauren used his phone to call someone else about her missing cell phone this event ties that friend with knowledge of Lauren’s whereabouts.

Asteroids are often used in pinpointing names involved in a forensic astrology study. In some cases they give chilling starry testimony to the people involved. One thing that I have noted anecdotally is that the occupants of the second house, which becomes the inverted eighth house, the house of transformations, when the chart is flipped, often contains information on the perpetrator or perpetrators.

The name asteroids of people who were involved in Spierer’s disappearance show a eerie correspondence with planets in Lauren’s chart. As this an active police investigation however, I will not expand further here. However, one thing I can say is that the asteroid data seems to clear Corey Rossman from direct involvement of Lauren’s fate. The name asteroid most closely representing Corey Rossman, Rosamunde, was at 17 degrees Aries, away from the action, in the third house of friends. He was not involved. 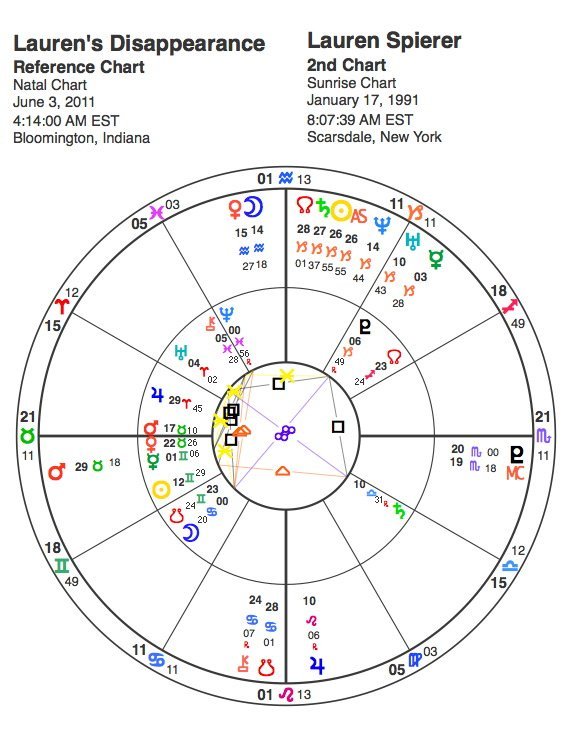 18 Responses to The Astrology of Disappearances: Lauren Spierer