The Astrology of the Disappearance of Lisa Irwin: Pluto on the Doorstep

Judge Judy Sheindlin gives us words to live by. “If something doesn’t make sense,” she say, “it isn’t true!”

The disappearance of 10 month old Lisa Irwin baffles. Put to bed by her mother reportedly at 10:30 PM, she was not in her crib when her father came home from work at 4:00 AM and found the front door and windows open, and all the lights on in the house. Alarmed he checks n this order, the boy’s room, children of a previous relationship of Lisa’s mom, and then Lisa’s room, who reportedly has a small cold, where he finds the child missing. He then goes to Lisa’s mom, Deborah Bradley and tells her that Lisa is not in her crib.

“I said, `What do you mean she is not in her crib?’” said Bradley, who had checked on her daughter about five hours earlier. “I just knew, you know, that something was really wrong. We ran around the house and screaming for her, but she was nowhere.”

The parents search the house calling for Lisa, and unable to find her, decide to call the police. Three cell phones, left on the kitchen counter while Lisa’s mom was reprogramming them, were not there. Irwin and Bradley (Lisa’s mother) speculate that the abductor took the phones to keep them from calling the police. This plan apparently failed because by 5:00 AM police were knocking on neighbor’s doors looking for Lisa.

Several days later the police have declared that they have done all they can do in a geographic search and have pulled back their command center less than a mile from Irwin’s house . The speculation by the parents that the abductor entered and left by a window goes unconfirmed by the police who say that there is no sign of forced entry.

Earlier reports that a man was seen carrying a baby in a diaper have been unconfirmed. Lisa’s mother reports that she put Lisa to bed in purple top with kittens on them and a pair of purple pants.

Reports from Bradley’s family say the police in questioning Bradley and Irwin have focused their efforts on Bradley, telling her she failed a lie detector test. The police say the parents are not suspects but that the parents have stopped cooperating. The parents, through a family spokesperson deny this, though they no longer want to speak to detectives.

So what can astrology tell us?

One of the best ways to see what happened is to follow the day of the people of question through the use of astrology charts. This astrologer uses IO’s Star Sprite program which advances the position of the planets and the houses minute by minute. Another view is gathered from the “last seen” chart. We will take a look at that first. 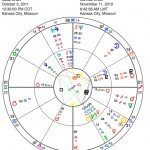 In the last seen chart Gemini is rising. Gemini deals with children.

The last seen chart is night chart, with the Sun below the horizon. In a night chart, the planet in the in the fourth house represents the mother. That the planet is “traditionally” a male planet, the Sun, doesn’t matter. The Sun here represents Bradley sitting in the fourth house of the home. Next to the Sun is Mercury, Saturn, and Venus all in the fifth house of children.

Jupiter is in eleventh house, Neptune on the cusp of the 10th. The tenth house is the house of career. With Neptune there, something is not quite right, something not quite truthful. Jupiter (representing the father) is in the house of “friends and associates”. Jupiter is square Mars and trines Pluto.

Come to find out that this is the one and only time that Irwin works a night shift, the night his daughter disappears.

Meanwhile, Lisa’s mother is a home dealing with two boys and a baby who has a cold. I don’t know about you, but this astrologer remembers of her baby days that when a baby has a cold, nobody sleeps. But is Lisa ill?

Chiron is at the top of the last seen chart and Lisa’s Mercury and Mars are in Sagittarius in the sixth house of health squaring that Chiron, so yes, we are dealing with an ill child.

But blithely, no one seems to be dealing with a ten month old with a respiratory illness.

In fact when Bradley goes to sleep, she lets the youngest boy and a newly found stray kitten into her bed not her ill daughter.

Now two weeks after her child was allegedly abducted from her home, Deborah Bradley admits that she was drunk the night Lisa went missing and that the time she last saw her child was four hours prior to the original time she reported to the police.

Indeed the last seen chart shows the moon (governing infants) and Pluto, the planet of transformation in the seventh house. This combination had already passed through the eighth house of death between 8:30 and 9:40 PM.

The last seen chart with the time of 10:30 is suspect since the timing of the 10:30 chart does not tie in with any astrological triggers. Everything, whatever that everything was, happened before 10:30 PM. 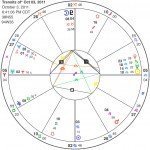 Now having admitted making one false statement to the authorities how much of Deborah’s story can we believe? Is the 6:40 time much more reliable?

This chart is interesting. Pluto and the moon are at the midheaven; Uranus, the planet of the unexpected at the ascendant. However the moon has already moved past Pluto’s position. The Sun, Mercury, Saturn and Venus stellium is in the seventh house. In addition Jupiter, representing the father was in the first house, Mars, the planet of trouble was in the fifth house of children in challenge aspect to Jupiter and Mars was inconjunct the Moon/Pluto combination. Was this the time that something happened to Lisa? Not likely since the Moon had moved past Pluto signifying that whatever happened already did. An alternate scenario is that a quarrel (planets in seventh house) opposite Uranus, and sextile Mars broke out between Irwin and Bradley.

Bradley bought the box of wine she claims she got drunk on at around 5:00 PM. She also bought baby wipes and baby food. Travel time is about 15 minutes from home. So maybe coming straight home she would have arrived and entered the house at around 5:30 PM.

For some reason Jeremy is not at work during the day. He will go to work shortly, but not before he and Deborah has the argument.

Neptune and Chiron, signifying Lisa’s illness has dipped into the twelfth house, the house of concealment. The argument may have been about how to conceal what happened to Lisa.

This is another last seen chart that is not a last seen chart. It is a significant chart as it fleshes out details of what may have happened at that time.

Fast moving bodies are usually trigger for events, and this case the fast moving body is the moon. The moon changed signs from Sagittarius into Capricorn, closely conjunct Pluto. This happened at 3:40 AM while Pluto and the moon were in the fifth house of children. At 4:16 AM the Moon and Pluto cross over into the 4th house, literally Pluto at the doorstep of the house of the home. At the same time Uranus, the planet of the unexpected crosses the eighth house cusp. Did something happen to Lisa at this time?

And is this the reason that Jeremy Irwin did not go to work at his regular time?

Neptune and Chiron are in sixth house of health, Mars, the planet of trouble is in the twelfth house.

Bradley and Irwin’s lawyer claims that grief is causing the inconsistencies in Bradley’s story. However, the astrology shows clearly that the events of the day are not as reported by Deborah Bradley.

Only two weeks after the Lisa’s disappearance a Grand Jury is convened to examine the evidence of the case. Certainly there are more details to piece together the events of the day Lisa Irwin went missing from her parent’s home. Hopefully soon, the truth will come out.

Photo courtesy of user crankycrankerson from a Creative Commons license as described by Photobucket. 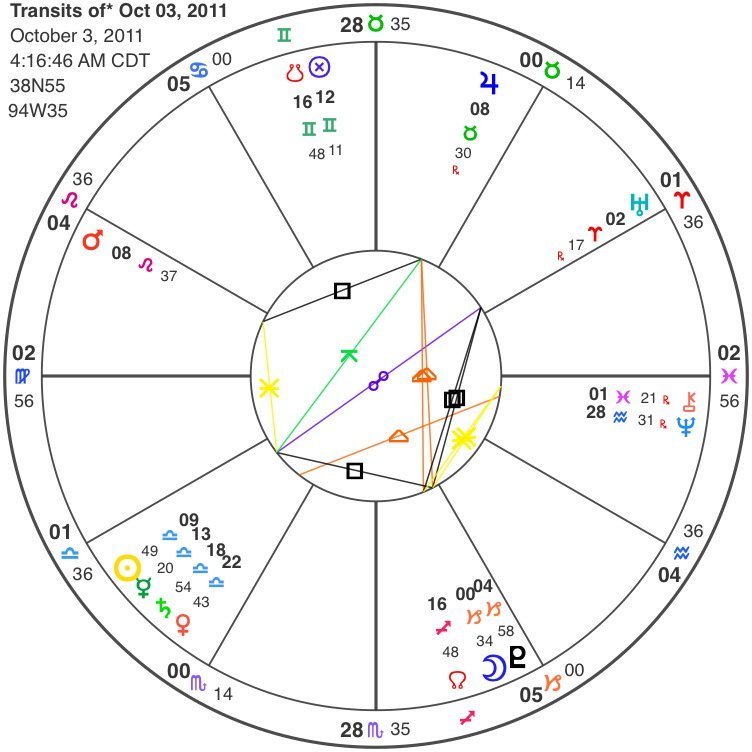 7 Responses to The Astrology of the Disappearance of Lisa Irwin: Pluto on the Doorstep