The Astrology of Missing Persons: The Death of Alice Davis 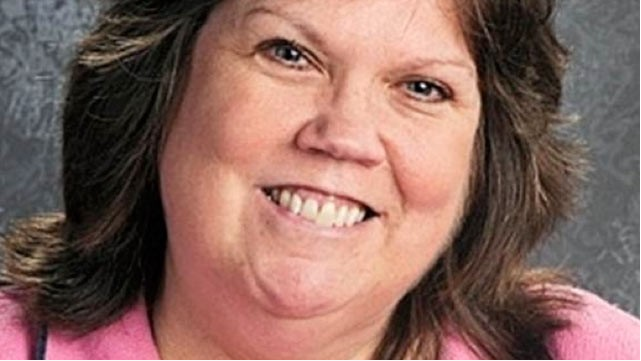 Her husband reported her missing after only hour and half gone to a shopping trip to Walmart. But from the beginning there were questions.

[Her sister] Barrie Tilghman believes something is amiss with the husband’s story that his wife went shopping Sunday evening. “For her to leave the house at that time of the day is counter-intuitive to Alice’s personality,” Tilghman said. “I’ve never known Alice to go to Walmart at 6:30 at night.

Police found her car in the Big Lots parking lot across the street from Walmart, but surveillance tapes didn’t show her at either store. In fact, the husband, Jesse Davis was seen to get out of the car at Big Lots.

As the search of Alice Davis, popular English teacher at Parkview High School just starting her 29th year there ratcheted up, Wicomico Sheriff’s Department eyed Jesse Davis as a suspect.

“Jess Davis initiated a deliberate, calculated and continuous course of deception and fabrication surrounding the disappearance of his wife,” Lewis said at a Thursday press conference, according to WBOC News.

Wicomico Bureau of Investigation (WBI) detectives questioned her husband, Jesse Davis, all week about her disappearance and possible whereabouts, and each time the story was a little different. According to reports, Jesse Davis had gaps in his memory about the events leading up to his wife’s disappearance and the discovery of her vehicle and personal belongings in a parking lot in Fruitland.

On Wednesday afternoon, the Wicomico County Sheriff’s Office held a press conference announcing foul play was suspected in her disappearance and the investigation was now considered criminal in nature. Wicomico County Sheriff Mike Lewis stopped short of naming any suspects in the disappearance, but it became apparent Jesse Davis had become more than just a person of interest.

But as they prepared to serve a serve warrant at Jesse and Alice’s home, a horrible discovery was made. Jesse Davis was found dead of an apparent suicide four days after he reported his wife missing. 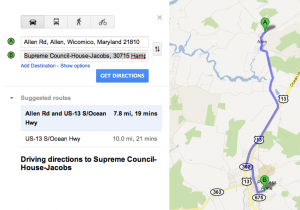 Sadly the body of Alice Davis was found and identified a little more than a week after her reported disappearance.

Davis’ body was discovered by congregation members at about 5 p.m. Sunday in a wooded area behind the Supreme Council of the House of Jacob Church, about a quarter of a mile from the road, according to police.
The church is located a little more than seven miles from the Davis home on Allen Road.

The Wicomico County Sheriff’s department says they have evidence which lead them to believe Alice’s husband killed her, but they don’t say what and they do not mention a motive.

What can astrology tell us about the death of Alice Davis?

Alice was last seen by some friends in her home about 3:00 PM Sunday, so this is the time stamp used for the event chart. We know from police reports Alice’s date of birth, but we do not know the time so we can not comment on her ascendant or the moon position. Her chart is set for sunrise.

In the chart displayed the event chart is the center chart because it has a reliable time. Alice’s chart is the outer wheel.

In the event chart second house of money the Moon is in Aquarius with a Neptune and Chiron opposite Mercury. This indicates unreliability and problems in money matters. Alice’s Jupiter, the planet of “way too much” and Pluto sit on this Mercury, the planet of communications and commerce.

We see that Alice has Venus in Capricorn, a placement that is careful with money and assets. Yet there is serious financial drain indicated by Chiron both in Alice’s chart and the event chart on the family coffers. Alice’s sister reports that Alice told her they decided to put the house up for sale.

As a teacher of 28 years, Alice could have some formidable assets piled up and one of them might be an insurance policy. Can it be that Alice’s husband was eyeing such assets to bail him out of financial trouble?

As to the placement of Alice’s body, the event chart sends us right there, with Saturn on the Midheaven degrees pointing due south. Adding the degrees of Saturn gets you seven miles and the seconds add up to 5 indicating the half mile off the road where her body was found.

It’s a chilling story all the way around.

Our condolences go out to the Davis family as they deal with this tragedy. 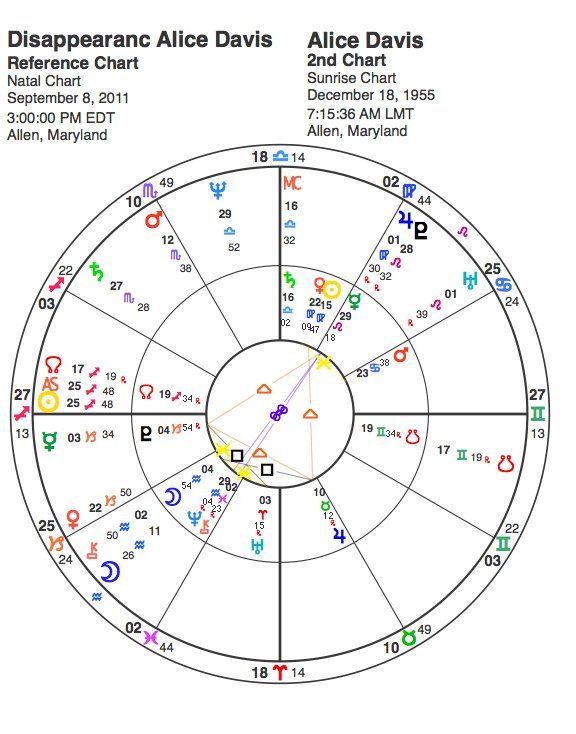