The Astrology of Disappearances: The Cell Phone Call from Deborah Bradley’s Phone

(True Crime and Astrology) Much has been made of the cell phones that were found missing at Lisa Irwin’s home the night she disappeared from her crib. Police attempts to locate Lisa or the cell phones have hit a dead end. Lisa’s parents decline separate interviews with the police.

Most frustrating are the shifting stories of Lisa’s parents. At first we were told Deborah Bradley, Lisa’s mother, last checked on the child at 10:30 PM. Then after video was displayed on national media of Deborah buying a box of wine, she recanted that story, saying she put Lisa, a child supposedly suffering from a cold, at bed at 6:40 PM, and then drinking enough wine that she went to bed so drunk she couldn’t remember the details of the night.

Deborah Bradley was untruthful in her initial statements to police. As observed in other blogs the emphasis for this family changed early on from doing what they can to find Lisa to protecting Deborah Bradley and Jeremy Irwin. We can not count on “last seen” statements from Bradley or Irwin because they appear to have their, not Lisa’s interests at stake.

So what is left for astrological analysis? The phone call from Deborah Bradley’s an outbound call is made from Deborah’s Bradley phone. phone at 11:57 PM. Regardless of who made this call it has telling details about Lisa Irwin’s fate.

The degrees the Moon and Saturn, which are conjunct, add to 15. Coincidentally:

. . . the FBI shared with them about the cell phone ping locations. According to Picerno Deborah’s phone never got further than 1/5 to 1/3 of a mile from the house

The moon at the cusp of the seventh house indicates a direction due west of where Lisa might be found; in a cold, dark an barren place that is unpleasant to find.

Photo courtesy of user crankycrankerson from a Creative Commons license as described by Photobucket. 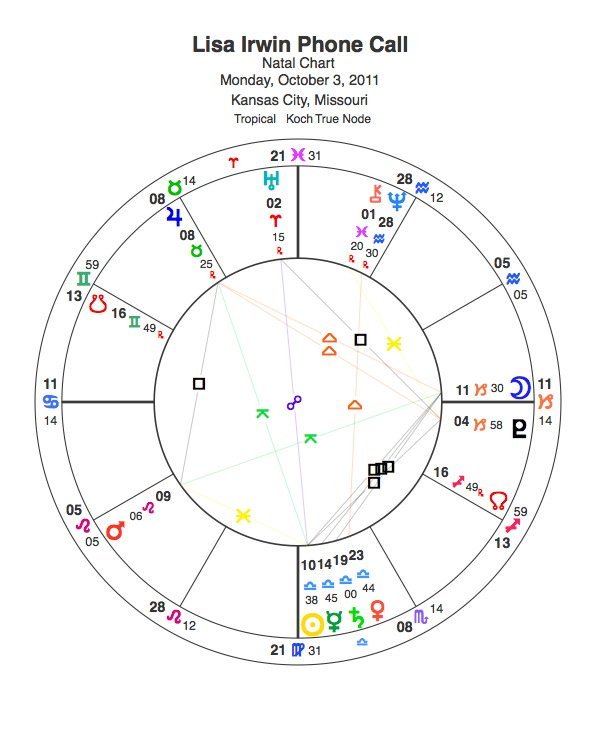 7 Responses to The Astrology of Disappearances: The Cell Phone Call from Deborah Bradley’s Phone