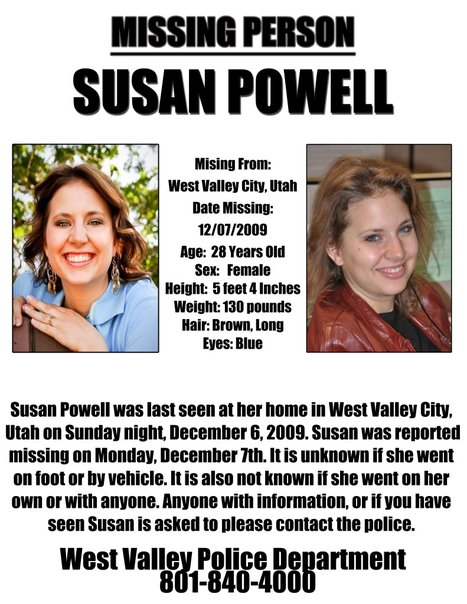 “A year before she disappeared, Susan Powell told a wide circle of friends she was preparing for the worst if she sought a divorce: that her husband might try to kidnap their sons and break her financially.

She said she had set up a separate bank account, arranged a place to stay if she decided to leave, and had informally written a will, according to friends who requested anonymity because they are not authorized by police to speak about the investigation. And Susan Powell made sure many knew of her preparations.”

Trouble was brewing in the Powell Salt Lake City household, December 6, 2009. The moon was in Leo and connected by conjunction Mars in Leo, which was opposite Jupiter and Neptune in Aquarius. Neptune is talks about secrets and with Jupiter sitting next to it, very big secrets.

Transiting Mars in Leo, that is, as it was in the sky was moving towards the position of Susan’s Mars in Leo. A woman with Mars in Leo tends to attract a man who needs attention centered on him.

With a Moon in Gemini, Susan was a social person, someone who attracted the attention of others.

Susan’s Sun was conjunct Pluto in Libra, in an intense combination that tends to attract partners for the purposes of transforming the ideas a soul has about relationships through situations centering on power and control. With many planets in Libra, even with her Pluto sitting on her Sun, she would tend to care take the relationship, even iwith a Libra’s characteristic flair with maneuvering people into the position she desired. Even so, whatever she did was done out of her sense of fairness and justice. With the planets of social consciousness, Jupiter (representing religion and law) and Saturn (duty), sitting next to her Sun as well, her spirituality, reverence for the law and her sense of duty would make it difficult for her to end a marriage even if she wanted to. In the previous year she decided to stay with her marriage after intense soul searching and prayer.

With many planets in harmonious or friendly aspect to each other, she was an even-tempered soul. Therefore, it is this astrologer’s position that the controlling element in the marriage was not Susan Powell.

On the day she was last seen, the moon moved toward her natal Mars, and towards the transiting Jupiter/Neptune opposition to it. Arguments were brewing, but Libra’s are known to avoid arguments if they can, even to the point of getting physically ill when one occurs.

What was the Argument About?

In the chart of the last day she was seen, Venus in the sky came to a return to Susan’s birth chart. In Susan’s birth chart, Venus is opposite Moon in Gemini. While we are not certain of Susan’s birth time, and we can positively state this for Susan, a person with Moon opposite Venus has problems with women. Notice also that the Sun, representing a man, is in Sagittarius. The sign of the Archer is well known for its infidelities.

So the argument was about infidelity, but whose? Did the gregarious Susan attract he wrong kind of attention and people started talking? Or was the husband stepping out on her?

While this is speculation, this astrologer’s opinion is that the husband was having an affair. Why the husband? The Sun in Sagittarius, representing the man, is in friendly energetic connection (sextile) with Neptune (planet of secret affairs) with is opposite Mars (the male sexual drive), and that Sagittarian Sun is very close to Susan’s natal Neptune. It was Susan’s husband who had the secret. 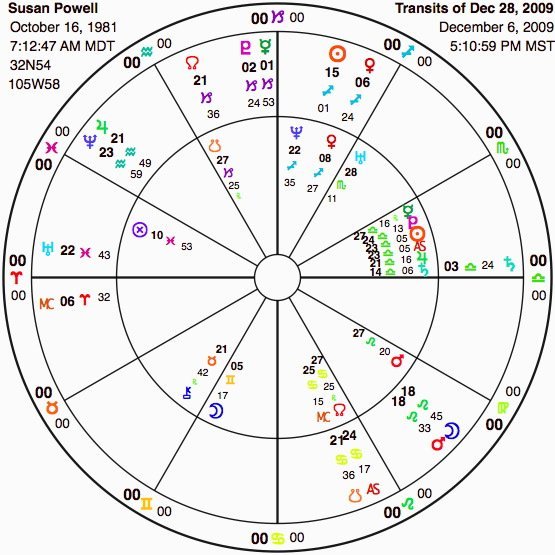 Next Installment: What Happened to Susan Powell?