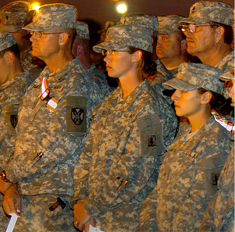 The events of 9/11 polarized a nation that still had a bad taste in its mouth from the Vietnam War. After Nixon pulled out the troops military actions were confined to joint U.N. missions, or “police actions” or “proportional responses” to provocative acts. The downing of the two towers of the world trade center, the nexus of financial activity for the world, was the second time since Pearl Harbor that America was attacked on its own soil. Even as we deplore then Presidents’ Bushes actions now, at the time, many Americans were not just ready but eager to go to war.

In the face of an ill-defined enemy we picked two that had “bad guy” written all over them. Afghanistan harbored the Taliban, noted for their hatred of American foreign policy and Saddam Hussein, whose threat was larger than life and the reality of the situation. That these two nations were predominately Muslim put us as odds with our Moslem trading partners. America did a lot of “happy dancing” trying to assuage the fears of the American public and the people who provided us with oil to run our businesses and heat our homes. In the end all we did was to confirm to many in the Moslem world, whose culture was already at odds with American culture, that we were the Great Satan that extremist Muslim Mullahs and Imans warned about.

And so it was that an American born Muslim army psychiartrist, of all people, torn apart by conflicting ideologies, opened fire on his fellow soldiers, leaving 13 dead and thirty wounded at Fort Hood, Texas on November 5, 2009 at 1:34 PM.

Even as the military and the FBI sort through the suspect’s garbage, his computer and his internet records, the motive for these tragic killings is still locked in Maj. Nidal Hasan’s mind. Conflicting reports continue to be bandied about in the media about the gentle demeanor of this man, and his growing dissatisfaction with U.S. military actions in the Moslem world.

But why there, why then?

The Event Chart of the incident can provide some clues. We know the date, the place and the time. We think we have good birth date on Maj. Hasan due to a military record that surfaced on the internet.

In the event chart, Aquarius, rule by unpredictable Uranus, is on the ascendant. Uranus rules gunfire, shootings and explosions. Three planets are tenanted on the ascendant, Jupiter, which serves as an amplifier of situations, Chiron, representing symbolically festering wounds, and Neptune, which shows a lack of clarity in the situation. These planets are in challenge aspect to the Sun/Mercury combo in the zodiac sign of Scorpio, the zodiac sign of secrets and transformations. The Sun/Mercury comb is in challenge aspect to Mars, which opposes the ascendant by a wide orb of 10 degrees.

While a horary astrologer might have a different take on this chart, whenever Mars is involved with Uranus, the possibility of an incident by gunfire increases. In the case of the Murder of Two Oklahoma Girls, Mars and Uranus directed their energy towards the victims and death by gunfire was the result.

Here the intersection of the perpetrator’s chart and the location proves fatal. Recently relocated to this facility it was now Hasan’s home base. Note that the Moon, the significator for “home base” was in the fourth house fo the home of the event chart, opposing Pluto, and challenging Hasan’s natal Pluto.

Venus, which we associate with beauty and love, sits in the eighth house of death. Hasan’s Venus sits alongside with Jupiter, the amplifier, sits on top of the event chart Venus. Perhaps Venus indicates the female officer that put him down, but we mustn’t forget that in ancient times for the Babylonians and for the Maya, Venus was the Planet of War.

For Maj. Hasan, this conjunction was the start of a new Venus cycle, a time when his value system shifted from trying to balance competing dichotomies of his American heritage and his Muslim faith to coming to terms with the deeper concepts of his faith.

On Hasan’s military record, his religious preference is marked as “no preference”, but in a convenience store photo taken couple weeks ago, Hasan was seeing wearing traditional Arab garb, but not clothing that is common to his Palestinian roots. Clearly, there is a shift away from his upbringing to a new form of religious identity.

The Uranus/Saturn opposition is no bit player in this tragic drama. Uranus has been working to break down Saturn’s barriers for the year and a half. This opposition has been working on Hasan’s natal Pluto for the same period. With transiting Pluto now in challenge aspect to Saturn and that Saturn conjunct Hasan’s Pluto, a breaking point was reached.

Though the media reports that Hasan acted alone, the event chart indicates otherwise. Mercury sitting next to the Sun, the significator for Hasan, suggests a younger person involved in this scheme. Time will tell if this observation bears out.

Was This Incident Planned?

Hasan had given his landlord two weeks notice he was quitting his apartment. He gave away belongings, he said his goodbyes. Mercury next to the Sun may indicate the planning that went into his plan. In his confused thinking he may have equated his plan with striking a blow to protest U.S. military involvement in sovereign Moslem nations. My personal take on this was that Hasan was planning suicide, since Pluto in its extreme form can represent suicide, by law enforcement. He didn’t expect to live through the event. 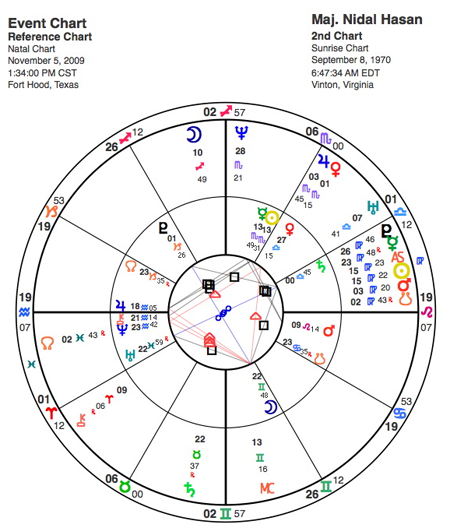 Photo printed under a Creative Commons License from Flickr.

3 Responses to The Foot Hood Killings: The Event Chart