The Astrology of Abductions: Somer Thompson 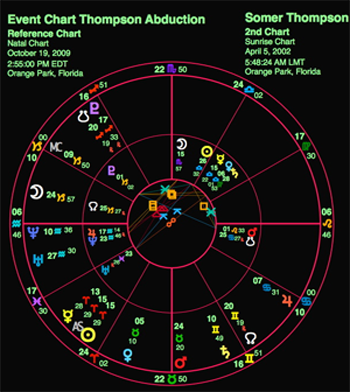 (True Crime and Astrology) Sadly, its been tentatively confirmed that the body of Somer Thompson, a 7 year old Orange Park, FL girl was found in a landfill 55 miles from her home.

The pictured chart is the event chart with Somer Thompson’s birth planets arranged in the outer wheel. Somer was born on April 5, 2002, but we don’t have a birth time or a birth place.

The event chart is tells the story of Somer’s disappearance. In the event chart, Mercury, Venus and Saturn sit in the Eighth house, the house of death, Somer’s Mercury was in tension aspect the event charts Mercury signifying the argument with another child that caused Somer, Venus signifying her, to ran ahead of the group with who she was walking home.. Unfortunately, as the event chart shows, she was literally running into the arms of her abductor. Uranus in the event chart is in tension aspect to Saturn, and inconjunct, often involved in crimes, to the Sun. It is entirely possible that the perpetrator passed the children in his vehicle as the argument ensued, saw a sudden opportunity and went ahead to confront Somer as she became cut off from the safety of her group.

With Somer’s planets arranged around the event chart, Somer’s Saturn tenants the house of endings, the fourth house . Remembering that the birth chart is actually upside side down in orientation, with flipping the chart Somer’s Natal Saturn, representing the body, is oriented northwest on a map. Adding the degrees of Saturn, Venus and Uranus gives the number 57, the rough amount of miles where Somer was found.

This cases illustrates that birth date information provided information that was not found in the event chart alone. It reaffirmed the traditional meanings assigned to the fourth and eighth house, and demonstrated what I’ve written previously, that Venus is often the signifier of the victim in the event chart. 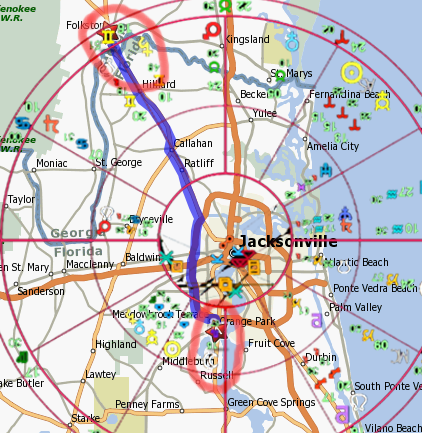 This entry was posted in Uncategorized and tagged Astrology of Abductions, child abduction, event chart, Somer Thompson. Bookmark the permalink.

2 Responses to The Astrology of Abductions: Somer Thompson